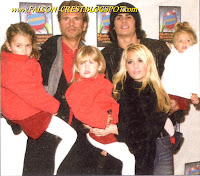 Lorenzo Lamas will star in a new Reality Show...

This is an article from hispanicbusiness.com:

Patricia Marroquin--HispanicBusiness.comMove over Kardashians. E! Entertainment Television viewers will soon have another family to keep up with, as Shayne Lamas, formerly of "General Hospital" and "The Bachelor" and daughter of actor Lorenzo Lamas, will star in a new reality series this fall, "The Lamas Family."

Shayne Lamas told People magazine: "There's a lot going on with our family, so E! approached us. I wasn't ready to jump on the reality train, but it gave my whole family an opportunity to work together. It's going to be funny, light and fresh."

Lisa Berger, Executive Vice President, Original Programming and Series Development for E!, was quoted on seat42f.com as saying: "This is a family only Hollywood could produce. From the twists and turns of the interpersonal dynamics to the hilarious antics, we know viewers will be highly entertained."

"This is a perfect family for reality TV," said the show's producer, Mike Fleiss ("The Bachelor," "High School Reunion"). "They are fun, funny and damn are they good looking."