It's time for the next opening: Season 8 version 6 (out of 7). Same cast but a new picture for Lorenzo. Enjoy! 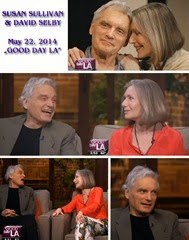 Susan Sullivan and David Selby are currently starring together in the play “A Delicate Balance”. And they both appeared on the morning show “Good Day LA” on May 22.

Check out this great interview. They still have a wonderful chemistry. 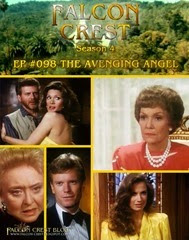 FALCON CREST FLASHBACK! 24 May 1985!
29 years ago, it was time for some revenge, some kisses and an explosion when the season 4 finale aired: 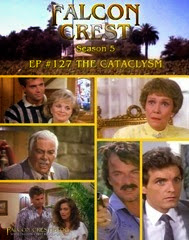 FALCON CREST FLASHBACK! 22 May 1986!
28 years ago, season 5 came to a bombastic end when this episode aired: 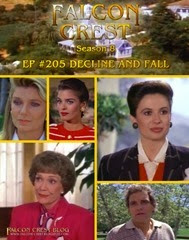 FALCON CREST FLASHBACK! 18 May 1990!
24 years ago, Angela Channing gave her final speech. Here's the Falcon Crest finale with Angela's soliloquy (written by Jane Wyman herself). Thanks to Tom Tagliente's suggestion I've added some new pictures to it to show all the people she mentions.
Enjoy the Falcon Crest finale in a new style! 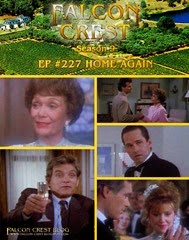 FALCON CREST FLASHBACK! 18 May 1990!
24 years ago, all things came to an end when the very last episode aired: 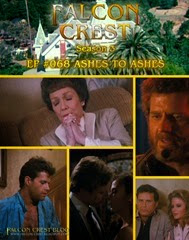 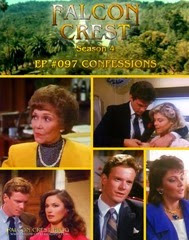 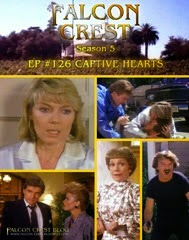 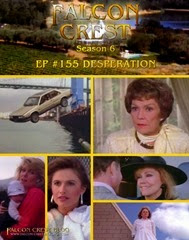 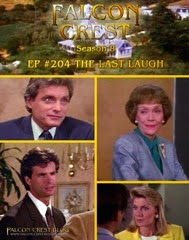 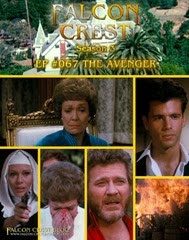 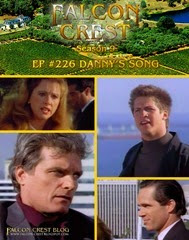 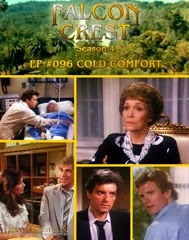 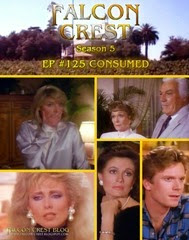 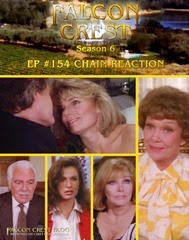 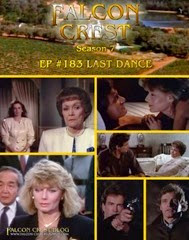 FALCON CREST FLASHBACK! 06 May 1988!
26 years ago, someone moved, someone shot and someone was burried when the season 7 finale aired: 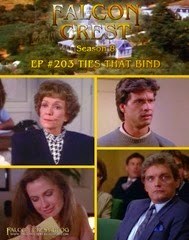 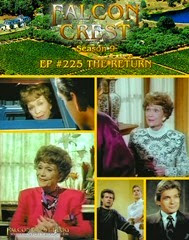 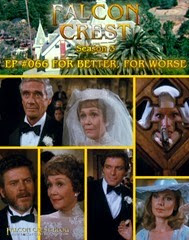 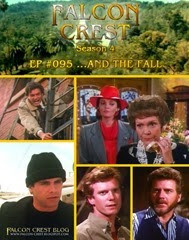 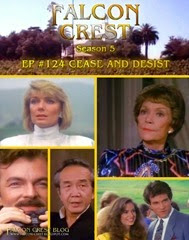 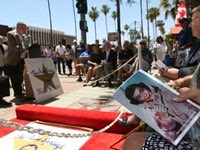 PALM SPRINGS – "Humanitarian." "Philanthropist." Two words used repeatedly Sunday in describing Academy Award-winning actress Jane Wyman when the 370th star on the Walk of Stars was dedicated in her honor.

"This woman could do it all. And she wasn't afraid to do it all," said actress and dancer Ruta Lee, who brought laughter with some of the stories she shared.

Celebrities Joey English and Susan Stafford also were among the roughly 100 people who turned out for the unveiling of the star in front of Azul at 369 N. Palm Canyon Drive, next to Carol Channing's star. The wind that had roared through the valley Saturday night was a light breeze that made the 75-degree morning pleasant for the near hourlong dedication.

Wyman had deep roots in the Coachella Valley. She was a frequent visitor during the 1950s and '60s, retiring to Rancho Mirage in 1994. As an arthritis sufferer, the Arthritis Foundation topped the list of numerous local charities to which she gave.

"She was a powerful woman. She was a passionate woman and she was a philanthropist," said Shanna Hirschi of the Arthritis Foundation. "She gave so much of her time, love and money to the foundation."

Longtime drama teacher Gerry DeVito worked at least a year and a half to raise the $10,000 needed to get Wyman a star. Every time he thought he had a fundraiser set, the plans would fall through. Then he met George Kessinger and husband Paris Kessinger, owners of Azul video nightclub and cafe. They helped fund Carol Channing's star in front of their restaurant and were happy to do the same for Wyman.

"Azul saved the day," DeVito said. "I call them my star savers." 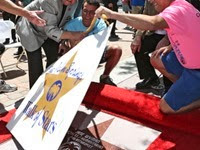 "It's an honor to even be involved," George Kessinger said.

The couple plans to help get more stars added to Palm Canyon Drive, including one for the late Stanley Kramer that is expected to be dedicated in November during the second annual film festival bearing his name. Walt Disney and Judy Garland are also on their "bucket list," Paris Kessinger said.

Absent from the event was Wyman's son, Michael Reagan. DeVito said Reagan was told of the ceremony and didn't know why he didn't attend. Reagan is one of two children Wyman had with actor and former President Ronald Reagan, to whom she was married from 1940 to 1949. Their daughter, Maureen Reagan died, in 2001 following a long battle with cancer.

Wyman's acting career spanned more than 60 years, starting with "The Kid from Spain" in 1932 and ending with an episode of "Dr. Quinn Medicine Woman" in 1993. Her TV career was highlighted by her role as Angela Channing, matriarch of a Napa Valley winery, in the nighttime drama "Falcon Crest," which aired on CBS from 1981 to 1990.

"She was lovely; a real solid star and solid pro," said Steve Black, who, with his husband, Henry Stern, wrote for "Falcon Crest."

"This is where her star belongs," said Stern. The couple resides in Palm Springs.

"Jane was kind, fair, strong and always prepared. She also had an unspoken humility. By that I mean she treated every one of us actors and crew members with respect and honesty," "Falcon Crest" cast member Ana Alicia wrote in an email DeVito read. She planned to attend the ceremony but needed to care for her ailing mother, DeVito said.

A fan of Wyman's work, DeVito said his favorite was her Oscar-winning performance as a deaf-mute rape victim in "Johnny Belinda" in 1948.

"Not one word was spoken, but we knew exactly what she was thinking," he said. "I loved her so much because she did comedy, she did drama, she sang, she danced."

The city of Palm Springs declared Sunday Jane Wyman Day. The 50-minute dedication ceremony was followed with a reception at Azul and tours of Wyman's former home in Rancho Mirage. 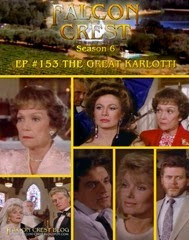