JANE BADLER launches her new album of original songwriting, THE DEVIL HAS MY DOUBLE, a compulsive mix of fame, sex and solitude, set to a sweeping soundtrack of cold soul and passionate synthetics. Melbourne album launch is on Saturday 14th June,
9pm at The Toff in Town, (Curtain House, 252 Swanston Street, Melbourne), where Jane will be performing the new tracks with Melbourne band SIR. Supported by Jessica Says.
at 10:53 PM 2 comments: 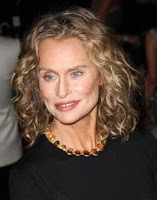 A very sleepy (or stoned?) Lauren Hutton has raised eyebrows after delivering a bizarre acceptance speech at Bravo’s 2008 A-List Awards (which aired on Thursday). The actress started her speech saying, “I’ve been up for 46 hours. It’s a long story, but a good one,” and continued to babble on from there. Check it out for yourself.

Shayne Lamas, the eldest daughter of U.S. soap star LORENZO LAMAS is to wed British stockbroker MATT GRANT after a televised proposal on the season finale of U.S. TV show THE BACHELOR: LONDON CALLING.
Grant picked Shayne to be his bride after a six-week dating game.
The finale, which featured the beaming Brit's proposal, aired on May 12, 2008. Lamas, 22, won 27-year-old Grant's heart from fellow finalist Chelsea Wanstrath, a 24-year-old pharmaceutical sales representative.
Shayne Lamas has two films coming out this year - Deep In The Valley and The 13th Alley.

source: contactmusic
at 7:21 PM No comments:

Actor-filmmaker Mel Ferrer (Philip Erikson from FC's season 1 - 3), the onetime husband of Audrey Hepburn who co-starred with the screen icon in "War and Peace," directed her in "Green Mansions" and produced her film "Wait Until Dark," has died at age 90, a family spokesman said on Tuesday.

Ferrer, who also appeared with Hepburn on Broadway for her Tony Award-winning turn in "Ondine," died in his sleep on Monday surrounded by relatives and friends at his family's ranch in Carpenteria, California, near Santa Barbara, the spokesman, Mike Mena said.

The lanky, gaunt Ferrer first appeared on Broadway as a chorus dancer in 1938. After suffering a bout of polio, he worked behind the scenes in radio, TV and film before making his big-screen acting debut in the 1949 drama "Lost Boundaries" playing a fair-skinned black doctor passing as white.

Delving as it did into the sensitive subject of post-war American race relations, it was a risky role that "had a huge impact on him and his commitment to civil rights," Ferrer's son, Mark, recalled of his father.

But he is best remembered for his role as the lame puppeteer in the 1953 musical "Lili" with Leslie Caron (Nicole Sauguet from FC's season 7), the same year Hepburn made her big-screen breakthrough opposite Ferrer's friend Gregory Peck in "Roman Holiday," which earned her a best actress Oscar.

Ferrer and Hepburn married in 1954 and appeared together that year in the Broadway production of "Ondine," for which she won a Tony as best actress for playing the water sprite just weeks after receiving her Academy Award.

They also co-starred in the 1956 movie adaptation of the Leo Tolstoy novel "War and Peace" -- she as Natasha Rostov and he as Prince Andrei Bolkonsky.

So intent was Hepburn on remaining near her husband that shooting of her Paris scenes in "Funny Face" were timed to coincide with Ferrer's filming of the French movie "Elena et les hommes," in which he co-starred with Ingrid Bergman.

Although he appeared in over 100 films and made-for-TV movies, Ferrer viewed himself less as a screen actor than as a creative talent behind the camera, his son told Reuters.

As a filmmaker, Ferrer directed Claudette Colbert in the 1950 mystery "The Secret Fury" and Hepburn in the 1959 romantic adventure "Green Mansions," set in the jungles of Venezuela.

But the couple enjoyed a more successful collaboration in the 1967 thriller "Wait Until Dark," which he produced starring Hepburn as a blind woman pursued by killers out to silence her as a potential witness. That role earned Hepburn her fifth and final Oscar nomination.

Their marriage -- the first of five for Ferrer (he was married twice to Frances Gunby Pilchard) -- ended the next year. Their only child, Sean Hepburn Ferrer, 47, is a filmmaker who directed the 2001 documentary "Racehoss."

Ferrer suffered a heart attack following their divorce, and Hepburn largely retired from Hollywood. She died of cancer in 1993.

Born in New Jersey, the son of a surgeon and a prominent New York socialite, Ferrer dropped out of Princeton University to work as an actor in summer stock, beginning a lifelong attachment to live theater.

With fellow actors Peck and Dorothy McGuire, he co-founded the La Jolla Playhouse in 1947, which is still running. His sister was the famed cardiologist Dr. M. Irene Ferrer, who helped refine the cardiac catheter and electrocardiogram.