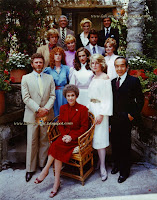 Warner Bros. announced that Season 2 of Falcon Crest will be released in October 2009 in Scandinavia (Sweden, Norway and Denmark).

In Germany and Spain, the DVD Box will be released in Spring 2010.

Unfortunately, there's still no release date for the US and UK.

Warner Bros. is now selling Season 2 here in the United States! The site, wbshop.com, says the DVD set is made to order.