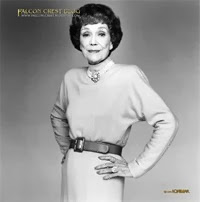 Mariska Hargitay Gets A Star

Mariska Hargitay (Carly Fixx from Falcon Crest’s seasons 7 & 8) was honored with a star on the Hollywood Walk of Fame.

Surrounded by loved ones, the "Law & Order" vet was overcome with emotion as she received her star, which is perfectly placed next to that of her mother, the late Jayne Mansfield. Among those who came out to celebrate Hargitay's milestone moment were her husband, Peter Hermann, their three children, August, Andrew, and Amaya, and her half-sister, Jayne Marie Mansfield.

Mariska Hargitay–Walk of Fame Ceremony
at 9:43 AM No comments: