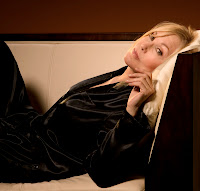 Kim Novak has lashed out at the makers of the Oscar-tipped silent movie The Artist, Fox News has reported. The actress, 78, took out a full-page advert in Variety magazine, stating that Michael Hazanavicius had plagiarised the Alfred Hitchcock classic Vertigo, in which she starred, by using sections of the movie's score within the score for his own film.