This is from the Falcon Crest Fanclub Website (www.falconcrest.org):

* Due to the overwhelming success of "Falcon Crest" particularly in Europe, the DVD release will take place in Region 2 only at this time, beginning in Germany on April 3. The next release will take place in Spain shortly after that. The release in the United Kingdom is roughly scheduled later in 2009; WARNER BROS. (U.K.) has not decided on the exact release date for their domestic market yet.
* WARNER BROS. has not made a final decision yet if and when there will be a Region 1 (U.S. and Canada) release.
* There are plans to release the following seasons on DVD also. The final decision, however, depends on the sales figures per quarter of the year, which each foreign WARNER BROS. branch has to report to the studio headquarters in Burbank, CA / USA. So it is highly important that as many fans as possible buy the season 1 DVDs as soon as possible to secure a release of the later seasons.
at 10:56 PM 4 comments:

Angela Morley, three-time Emmy winner and two-time Oscar nominee for her film and television music and one of England's best-known arrangers, died Wednesday, Jan. 14 in Scottsdale, Ariz., of complications from a fall and subsequent heart attack. She was 84.

She also composed several film scores including the animated "Watership Down" (1978) and, under her birth name of Walter Stott, "The Looking Glass War" (1969), "Captain Nemo and the Underwater City" (1969), "When Eight Bells Toll" (1971) and several low-budget British features in the 1950s.

Morley scored dozens of TV series episodes in the 1970s and '80s, receiving Emmy nominations for her work on "Dallas," "Dynasty," "Blue Skies" and "Emerald Point N.A.S."; she also scored "Falcon Crest," "Hotel," "Wonder Woman" and other shows. She also scored four TV-movies including the remake of "Madame X" (1981) and received 11 Emmy nominations in all.

She also contributed orchestrations to nearly three dozen films, among them such John Williams scores as "Star Wars," "Superman," "E.T., the Extra-Terrestrial," "Schindler's List" and "Home Alone." Williams employed her regularly during his stint with the Boston Pops in the 1980s and '90s; her arrangements are featured on more than a dozen Pops albums.

Born Walter Stott in Leeds, Yorkshire, he played alto saxophone in English big-bands of the 1940s but became a full-time arranger in 1950, eventually arranging records for such popular singers as Mel Torme, Rosemary Clooney, Marlene Dietrich and Noel Coward.

He wrote and conducted music for BBC Radio's popular "Goon Show" in the 1950s and was active on the British music scene as an arranger-conductor throughout the 1960s. He became Angela Morley in 1972 and conducted the BBC Radio Orchestra during the 1970s. She moved to the U.S. in 1980.

She is survived by her partner, Christine Parker; a son, three grandchildren and two great-grandchildren.

It's finally happening!!
Falcon Crest will be released on DVD.

In a message dated Jan 16, 2009, WARNER BROS. Entertainment (Germany) informed the German Falcon Crest Fanclub (DFCF) board of directors season 1 will be released on DVD towards the end of April 2009. No bonus material will be included.

As soon as there are some details available you'll be informed.
at 4:49 PM 5 comments:

I've created a music video with some nice Cole and Melissa-scenes and combined it with one of my favorite tracks "Time after Time", performed by Cyndi Lauper and Sarah McLachlan (This version is from Cyndi's album "The Body Acoustic").
Hope ya like it.

I think, there was a great chemistry between William R. Moses and Ana-Alicia and in those scenes you can see how well they worked together.

This is a video from Falcon Crest's episode #116 "Gambit Exposed" (Season 5): Angela and Chase in a funny wine competition on Hawaii.

here's a new video for you. I've created an alternative Maintitle for Season 4.
Hope you like it. I've tried to imitate the well-known FC Style that was used in that season.

On March 9, 2009 the new TV Series "Castle" will start on ABC. One of the Main Characters in this 1 hour drama is Susan Sullivan (with a new hair colour) who stars as Martha Heath.

Castle is a 1 hour witty drama based on a famous crime and horror novelist who helps the NYPD homicide department solve crimes.

Richard “Rick” Castle [Nathan Fillion], a rock star of the literary world, is suffering from a case of writers block after killing off the main character in his novels and is struggling to come up with a replacement.

Castle had grown weary of having it all, “fame, fans and females”, when he was approached by the attractive Detective Kate Beckett [Stana Katic] of the NYPD to help catch the copy-cat killer staging murders based on scenes from his novels.

Castle is not a traditional investigator and his approach to solving the crimes conflicts with Beckett’s conservative approach leading to much tension and a hint of romance.

Castle is inspired by shows like “Rockford Files” & “Moonlighting” that are lighthearted with romantic tension and unlike the dark procedurals prevalent today Castle invites the viewer to invest in the relationship of two people having fun together and engaging in witty banter.

Castle is directed by Rob Bowman whose credits include Day Break, Night Stalker and X-Files and is produced by Andrew Marlowe, Armyan Bernstein, Laurie Zaks and Rob Bowman.

Here you can watch the Trailer on youtube. Unfortunately, Susan is not shown in it.

Rod Taylor (Frank Agretti), who is turning 79 on January 11, is currently working on a new project: He will be starring as Winston Curchill in Quentin Tarantino's new movie "Inglourious Basterds" which is shot in Germany.
Stars in this movie are Brad Pitt, Diane Kruger, Samuel L. Jackson and German actors Christoph Waltz and Til Schweiger.

Synopsis: During World War II a group of Jewish-American soldiers known as "The Basterds" are chosen specifically to spread fear throughout the Third Reich by scalping and brutally killing Nazis. The Basterds soon cross paths with a French-Jewish teenage girl who runs a movie theater in Paris which is targeted by the soldiers. 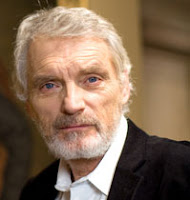 David Selby will play Abraham Lincoln in James Still's The Heavens Are Hung in Black, to play February 3-March 8 at Ford's Theatre in Washington, D.C. The production, which opens officially on February 8, will be directed by Stephen Rayne.

The show focuses on Lincoln's tenure in the five months between the death of his young son, Willie, and the issuance of the Emancipation Proclamation. During this time, he is visited in dreams by Jefferson Davis, Dred Scott, and Uncle Tom.

For more information and tickets visit http://www.fords.org/
at 9:59 PM No comments:

This is a music video I've created in 2002. It features the story of Maggie and Richard with the song "Indigo Girl" by Watershed.
At that time I only had the German version of this series so I used some short tracks of the German voices. Hope it's not too weird for English speaking fans.

This is a small clip from "Inside Television" about the 200th episode party of "Falcon Crest" which was celebrated on February 11, 1989 at the Four Seasons Hotel in Beverly Hills.

And here are some pictures taken at the event: