This is a trailer video with scenes from one of my favorite episodes: Season 7 finale "Last Dance".
This episode has so much power and great moments. I composed some music for it to make it more dramatic so I hope you'll like it.  :-)
Have fun

Falcon Crest's season 3 soon to be released on DVD

The picture shown here is not the official DVD cover, just an example how it could look. 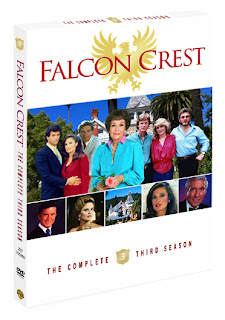 Knight Michael Robbins, founder of Napa Valley's Spring Mountain Vineyard, passed away at his home in St. Helena on Jan. 29. He was 89.
Robbins was one of several pioneers who came to Napa Valley in the 1960s, imagining a picturesque estate in Napa Valley where he could make great Cabernet Sauvignon and Chardonnay. What he ended up creating was one of Napa Valley's greatest properties—the 845-acre Spring Mountain Vineyard. The extraordinary estate became popular, especially for its Victorian mansion, which was the featured set for the TV series Falcon Crest.
Born in Des Moines, Iowa, in 1923, Robbins found his passion for wine later than most—he didn't try it until he was 31. After several years in the Navy, he worked in real estate in the Bay Area and was soon commuting back to St. Helena every weekend to pursue winemaking, with dreams of opening his own winery.

Robbins purchased and restored an old Victorian house along Highway 29 and established Spring Mountain Vineyards (the property is now St. Clement). At the time, it was only the 16th winery in the valley. His first release, a Cabernet Sauvignon from the 1969 vintage, won critical acclaim, and included grapes from Martha's Vineyard. Spring Mountain Vineyards became a highly regarded wine, faring well at many prestigious wine competitions, and was one of the wines poured at the famous 1976 Judgment of Paris.
In 1974, Robbins purchased the historic Tiburcio Parrott property on Spring Mountain Road near St. Helena, restoring the large villa on the property and constructing a new winery for Spring Mountain. The popularity of Falcon Crest made Napa Valley an increasingly popular destination to visit, but despite Robbins' ambitions, he struggled to keep up with a growing industry and his affinity for the business waned. During the late '80s, the estate became too much to handle. He put the winery on the market and left the business in 1992, retiring shortly thereafter.