According to the Hollywood Reporter, Gina Lollobrigida (Francesca Gioberti on Falcon Crest, 1984) is threatening legal action against a former boyfriend decades younger than her on claims he married her by proxy in order to claim part of her estate.

Lollobrigida, 85, confirmed Tuesday that she filed a formal complaint in Rome on Sunday against former beau, Javier Rigau y Rafols, a Spanish citizen. Rigau is reported to be between 44 and 51 years old, depending on the news source.

In a bizarre case that would not be out of place in the 1950s comedies she starred in, Lollobrigida alleges Rigau married an imposter who claimed to be her in a civil marriage ceremony in Barcelona held in 2010. A marriage certificate would likely make Rigau Lollobrigida’s prime heir.

“This vile and dishonest person married me by proxy, without my knowledge, without my permission, in order to inherit my estate after my death,” Lollobrigida said. “There will be an international investigation into everything because I want to shed light on this squalid affair and all the people involved.”
According to Lollobrigida, Rigau had previously obtained a power of attorney in order to help her clear up some legal problems. She said she believes that allowed him to carry out the bogus marriage ceremony. Lollobrigida said she discovered the fake marriage only after coming across a document online that showed she was married to Rigau.

“I found a document in which it seems that in November 2010 he became my husband, before eight witnesses,” she said. “I fear he took advantage of the fact that I don’t understand Spanish. Who knows what it is he had me sign?”

The relationship between Lollobrigida and Rigau lasted more than 20 years after they met at a 1980s party in Monte Carlo. She said she considered marrying him in 2006, but she changed her mind, believing it would be a mistake. 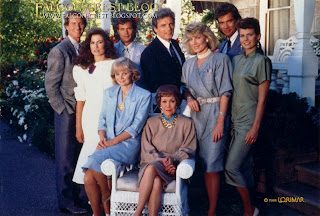 Hi everyone, how are you?
I'm sorry for being so quiet for the last months but I have so much going on right now and I didn't find the time to post something... Sorry.

But I hope you'll love this one: There's a great new article about Falcon Crest online at Hill Place: http://www.hillplace.blogspot.de/2013/01/Favoring-Falcon-Crest.html

Some of you might have seen the Pioneers of Television segment concerning prime time soaps. But unfortunately, they totally missed to talk about Falcon Crest. It's all about Dallas, Dynasty and Knots Landing. Too bad.
Hill Place posted a blog about this special and wrote a great overview of Falcon Crest (Thanks to my friend Missy for recommending).