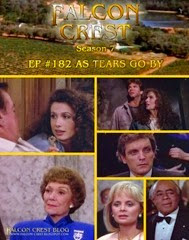 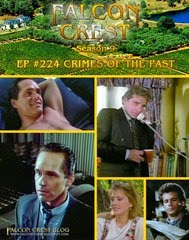 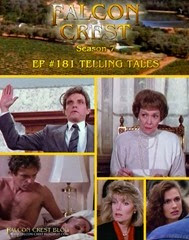 FALCON CREST FLASHBACK! 22 April 1988!
26 years ago, Richard found a dead woman in his bed and Angela was telling some nice stories… 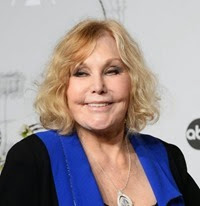 After her recent Oscar speech, Kim Novak received a lot of bad press and comments about her unnaturally looks and her appearance.
Now, she decided to go in public and write an open letter about being bullied by the press and the public on the internet and on TV.

She also talked about this issue with Robert Osbornre at the TCM Classic Film Festival before a screening of her movie “Bell, Book and Candle” at the Egyptian Theatre on April 19, 2014.

KIM NOVAK SPEAKS OUT ABOUT OSCAR BULLYING
It’s time to address the elephant in the room...the Oscars. I was very excited when I was asked to be a presenter on the show. I was excited, yet nervous.
Years ago, I walked away from Hollywood partially because I didn’t stand up to the bullies. I caved in to the pressure instead of fighting for what I felt was right…and I didn’t have the courage to prove myself to my peers through my work.
After my appearance on the Oscars this year, I read all the jabs. I know what Donald Trump and others said, and I’m not going to deny that I had fat injections in my face. They seemed far less invasive than a face-lift. It was done in 2012 for the TCM interview special. In my opinion, a person has a right to look as good as they can, and I feel better when I look better.
When I was honored at the Cannes Film Festival last year, I received an overwhelming standing ovation. Yet, in Hollywood, after the Oscars, I was bullied by the press and the public on the Internet and TV. The only difference that night was that I had taken a pill to relax—that I shouldn’t have taken. I had been fasting for three days and it affected my behavior. I regret taking it.
However, I will no longer hold myself back from speaking out against bullies. We can’t let people get away with affecting our lives. We need to stand up to them in a healthy way by speaking out, working out and acting out. I am speaking out now because I don’t want to harbor unhealthy feelings inside me anymore.
One of the reasons I enjoy exercising and painting so much is that I can let out my frustrations and reactions to what’s happening in the world around me by working it out in a healthy way. It helps me, and doesn’t hurt anything or anybody. People need to get these things out of their systems and stand up to bullying. I believe there would be less suffering and violence, too!
Source: https://www.facebook.com/KimNovakActress

Here's the third version of the season 8 maintitle. A shorter version without Ana-Alicia. 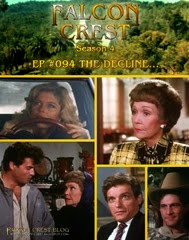 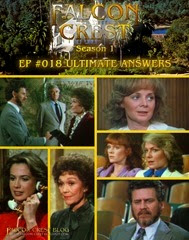 32 years ago, the first season ended with a smiling Angela when this episode aired:
1x18 (#018) Ultimate Answers 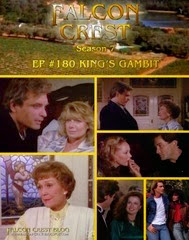 26 years ago, Angela was quite busy: She tried her luck as a matchmaker, made some hot chocolate for Maggie and threw a party. What a week. 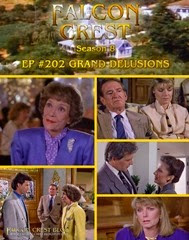 FALCON CREST FLASHBACK! 14 April 1989!
25 years ago, nobody believed that our honest Angela was really telling the truth when this episode aired:
8x19 (#202) Grand Delusions 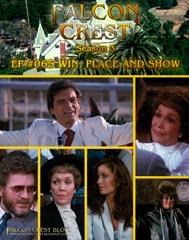 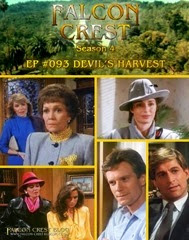 29 years ago, Angela planned the ruin of her beloved partners, Robin planned a baby and Cassandra planned the destruction of Falcon Crest when this episode aired:
4x25 (#93) Devil’s Harvest 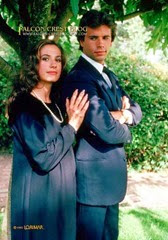 Here's the second version of the season 8 maintitle. Dana Sparks is out, replaced by David Beecroft. 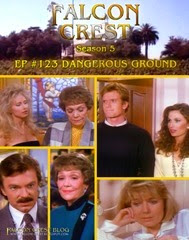 28 years ago, Jordan felt a bit humiliated and Maggie felt a bit worried when this episode aired:
5x25 (#123) Dangerous Ground 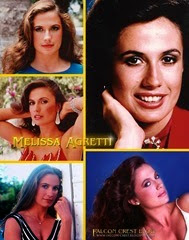 ThrowbackThursday brings us the beautiful Ana-Alicia aka Melissa Agretti! 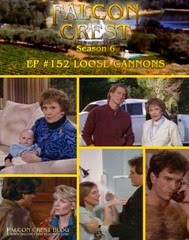 27 years ago, Richard and Maggie had their first shower together and Angela had some fun as a babysitter when this episode aired:
6x25 (#152) Loose Cannons 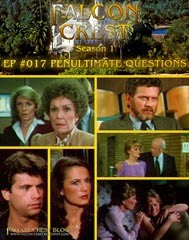 32 years ago, Douglas Channing went to the heavenly vineyard and Angela was furious when this episode aired:
1x17 (#017) Penultimate Questions 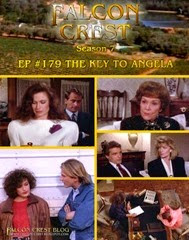 26 years ago, Melissa heard Chase’s last laughter and inherited a secretful key when this episode aired:
7x24 (#179) The Key To Angela 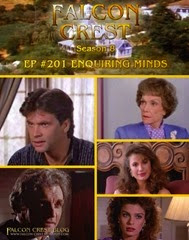 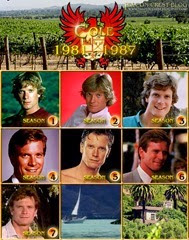 Sunday's Season Question: Cole had an incredible journey on Falcon Crest. Starting as a young man he developed into a grown man and responsible father. Which season was your favorite Cole-season? Any memorable moments you'd like to share with us? 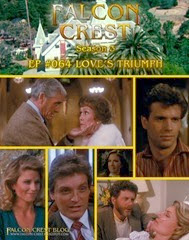 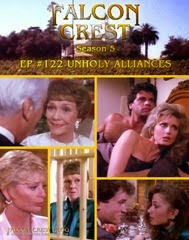 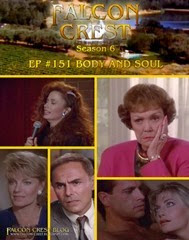 Susan Sullivan & David Selby together in “A Delicate Balance” 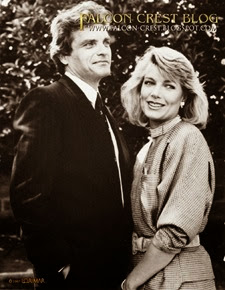 Yesterday, Broadwayworld.com published an article and provided more information about the play:

A caustically funny and moving exploration of the bonds of friendship and family in a threatening world, A Delicate Balance is considered by many to be Edward Albee's most challenging work. The first of his three Pulitzer Prize-winning plays, it is stylish, daring and profoundly touching - full of memorable Albee bits, bountiful bursts of colorful invective and lacerating repartee.
Empty nesters Agnes (Sullivan) and Tobias (Selby) share their upper middle class suburban home with their permanent houseguest - Agnes' tartly entertaining and perpetually soused sister, Claire (O-Lan Jones). The household's precarious equilibrium is disrupted one evening by the appearance of lifelong family friends Harry (Mark Costello) and Edna (Lily Knight), who are seeking refuge from an unnamed terror. When daughter Julia (Deborah Puette) returns home in the throes of the breakup of her fourth marriage, she finds her room occupied by Harry and Edna, who refuse to leave.
"Albee is concerned with the human condition," says Larsen. "That existential dread that we all deal with on a daily basis. Human relationships are so tenuous, even those with our closest family and friends - at the end of the day, we are alone. A Delicate Balance explores the unsettling side of what it means to be human."
Best known for his first full-length play Who's Afraid of Virginia Woolf?, Albee's early one-acts, including The Zoo Story, established him as a critic of American values. In addition to A Delicate Balance, Albee received Pulitzer Prizes for Seascape and Three Tall Women. Recipient of a 2005 Lifetime Achievement Tony Award and many other awards over the years, Albee has been called "America's greatest living playwright" - and the playwright himself has caustically replied that all the others are dead. 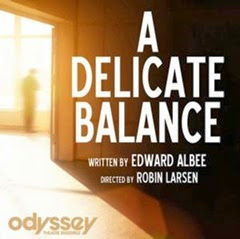 Set design for A Delicate Balance is by Tom Buderwitz; lighting design is by Leigh Allen; sound design is by Christopher Moscatiello; costume design is by Dianne K. Graebner; dramaturg is Christopher Breyer; and assistant director is Miranda Stewart.
Performances of A Delicate Balance take place on Fridays and Saturdays at 8 p.m. and Sundays at 2 p.m., April 26 through June 15. On Sunday, April 27 only, the performance will be at 5 p.m. with no 2 p.m. matinee. Additional weeknight performances are scheduled on Wednesdays at 8 p.m. on May 21 and June 4; and on Thursdays at 8 p.m. on May 8, May 15, May 29; and June 12. Tickets are $30, except for the opening night performance on Saturday, April 26 which is $45 and includes a gala reception with the actors. There will be three pay-what-you-can (minimum $10) performances on Friday, May 2; Thursday, May 8; and Wednesday, May 21. The third Friday of every month is wine night at the Odyssey: enjoy complimentary wine and snacks and mingle with the cast after the show. The Odyssey Theatre is located at 2055 S. Sepulveda Blvd., West Los Angeles, 90025. For reservations and information, call (310) 477-2055 or go to www.OdysseyTheatre.com. 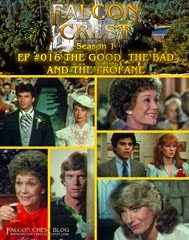 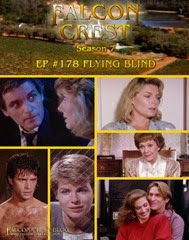