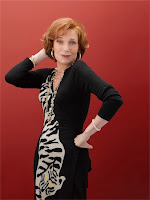 There's a great interview with Susan Sullivan at Jimhalterman.com.

Susan talks about her new show "Castle" and a bit about leaving Falcon Crest.

While younger audiences may be getting their first taste of the talents of actress Susan Sullivan on the ABC crime drama hit Castle, TV fans have been enjoying seeing Sullivan in roles ranging from career women (Julie Farr, MD and Rich Man, Poor Man), a saucy waitress (the 80s sitcom It’s A Living) and many mothers (Falcon Crest, Dharma & Greg).

Castle stars Nathan Fillion as Richard Castle, crime novelist, who, while doing research for his books, bases a character on Detective Kate Beckett (Stana Katic) and while he ends up helping with the crime of the week, Castle and Beckett also share a will-they-or-won’t-they sexual chemistry that often drives the episodes, as well. Sullivan plays Castle’s flamboyant actress mother and just about steals every scene she glides through.

Sullivan recently took the time to chat with me by phone and talked about how much of her is in Martha on Castle, her beginnings as a Playboy bunny and, among other career highs and lows, how she didn’t necessarily love how her longtime Falcon Crest character was killed off.

Jim Halterman: Let’s talk about Castle first. What drew you to the role?

Nathan Fillion and Sullivan play son and mother on CASTLE

Susan Sullivan: Joan Van Ark [best known as Valene Ewing on another 80s soap Knots Landing] made a very funny comment. She said ‘Oh, you got that part! Every diva in New York and LA were circling around it!” There aren’t many good parts for women who are a little older. When I read it, I liked the script, I thought it was a little retro, which it really is. It’s kind of an old fashioned show. I thought it was the perfect part for Elaine Stritch when she said ‘Dollface’ and ‘Kiddo’ and talked out of the corner of her mouth. She seemed like an old toughie. I really didn’t think I was right for the part but you go in and read for it, put your spin on it. During the audition – and to me this is why I think I got the part – I didn’t realize I was doing the audition with Nathan. I thought he was just a reader. At one point, I was seated and I stood up and he stayed seated and, you know, you don’t want to look down if you can avoid it since they always tape these auditions. So I said to him, “Get up! Get up!” and we went off and did the scene. He laughed, I laughed and they laughed and I think it was that quality more than anything else, which is part of the dynamic of their relationship. It’s turned out to be a wonderful part and instead of saying “Kiddo” I say “Darling” and I’m very comfortable.

JH: Martha is kind of bigger than life but how much of you is in there?

SS: Oh, plenty! When I look at it, I go ‘Who is that person?’ but it is me. Also, when I got the part, I was doing a play in New York and I was spending the summer with my mother who is 93 and I felt so much of her was so right for this part so to some degree it’s an homage to my own mother.

JH: As a regular Castle viewer, I always want a little more Martha in the episodes. Do you think there will be a Martha-centric episode in the future?

SS: I don’t think so because their main thrust is always the mystery and I know that there have been storylines that sounded really fun and interesting because they have to finish that story and what always gets dropped are always those little character things. It’s tricky but it’s kind of nice. I have a really full life. It’s not just about going to work.

JH: I was looking at your credits and it said you were a Playboy bunny at one time. That must have been interesting!

SS: When the Playboy club opened in New York in 1964, I was in college and I was modeling during the summer and I saw the big ad in the New York Times and, at that point, Playboy magazine was like erotica and I thought ‘Oh, I’d love to see the inside of the Playboy club!’ I wasn’t going for the job, I was just going for the adventure. And it turned out they worked around my schedule and I’d work on weekends. I made very good money, I’d walk around the tables and say “Forthwith, my Lord, what will thou be served this evening?” They’d go ‘What? What is she talking about?’ I’d say “Well, I just didn’t want you to think I was just a Playboy bunny. I’m doing Hamlet at Hofstra College where I go to school!’ It was really an interesting little adventure.

On a Soap Opera cover in the 1970s w/Nicholas Coster

JH: You had also done a lot of daytime TV work before you hit prime time, right?

SS: I guess I was on Another World for three years before I came to LA and that was because, and I love this story in terms of the things that turn the road in your life, I was in a love affair with a man who really was not that interested in me but I thought, ‘Well, I’m just not going to be available when he calls’ so I did a play in between doing the soap opera and a new agent saw me and he was a big NY agent and he said ‘I will handle you if you leave New York and go to Hollywood because that’s where you should be.” It never would have occurred to me to do that. So, I left the soap with the caveat that I could come back if it didn’t work. I came out for three weeks and literally the day before I was supposed to go back I got a part so that was that turn in the road. Otherwise, I’m sure I would have stayed on Another World until it shut down.

JH: The daytime world is such tough work. Do you still use some of that training in your work today?

SS: It was a real interesting training ground. When I was doing it, it was in the early 70s and then it was a half hour, right before we went to an hour. You went in in the morning and you did the whole thing like a little three act play. You rehearsed it and you shot it in the afternoon with three or four cameras. You didn’t do it broken up at all. My friend Louise Sorel [Vivian on Days Of Our Lives] was telling me that she does seven shows in a week. Seven hour shows in a week. We do one-hour episode in eight days! It’s mind-boggling. Flying by the seat of your pants when you’re young you just learn certain skills but you also pick up some bad habits.

JH: Did you ever feel pigeonholed by the soap work you did?

SS: I feel like I rode the crest of the wave of the women’s movement. When I came out to California, I think I was 32 and I felt so old! I felt just as old then as I do now! The first job I got they were all 18-year olds auditioning for the part. I think because I had some authority that the first job I got, which was Rich Man, Poor Man, which was playing a lady lawyer and then the next one was a doctor, Julie Farr, M.D. so I was playing all these strong women so I didn’t get pigeonholed by the character I played on Another World, who was a nurturing, loving mother, even though I got back to her on Falcon Crest but Maggie Gioberti was miles away from Martha Rogers or even Kitty Montgomery but I’ve had a good run playing mothers.

The cast of the 80s soap FALCON CREST

JH: Were you upset that they killed off Maggie on Falcon Crest after you had been on for so long?

SS: I was certainly ready to go but I thought it was such a macabre way to go. I watched recently on YouTube and it was creepy. The set up was that Richard Channing had given her this big diamond ring and she’s at the side of the pool with the kids and one of the toys drops at the bottom of the pool. She says “I’ll get it!” She dives at the bottom of the pool and she gets the ring finger caught on the grate on the drain and drowned. This horrible shot that pulls back of this body hanging from the grate. It was awful!

JH: You’ve done a comedy with Dharma & Greg and also It’s A Living…

SS: …Oh my God! I forgot It’s A Living! I remember when I went in and I didn’t have to read for that one. I said ‘I’m not really right for this part. I just played a lawyer and a doctor’ As I’m talking I was thinking ‘Susan, you’re going off the deep end. All you’ve ever done is be an actress and be a waitress!’

JH: Is comedy or drama more of a challenge for you since you’ve done both?

SS: I think if you’re an actor, you’re an actor and you submerge yourself in the character and you don’t worry about whether you laugh or cry. One of the directors said if you – the actor – is crying and the audience then the audience isn’t and then if you’re laughing, then the audience isn’t. So I don’t think it’s a matter of comedy or drama but I do think that timing is a gift. I don’t think everybody can do comedy because some people’s rhythms are a little off but they’re both part of what it is to be alive.