Lorenzo's Ex-wife in a "big" production 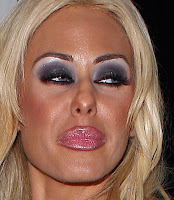 Well, if nobody talks about you then... release a sex tape! Is that what Shauna Sand, Lorenzo Lamas' ex-wife has had in mind? I don't know. But just in time when Lorenzo's new reality show started, a sex tape of Shauna appeared. What a coincidence.
Unfortunately (just kidding) it's not Lorenzo who's with her in this tape. ;-)

I will spare you to having to watch Shauna in her "natural" glory. If you're interested in that kind of stuff just google for it.

Shauna Sand has a raunchy sex tape.
The former Playboy Playmate and fourth ex wife of Lorenzo Lamas, with whom he has three daughters, is the star of an explicit sex tape being offered for sale by Vivid. Sand, contacted by TMZ, said she is NOT on board with the Vivid release:
"Yes

I did make a sex tape with my boyfriend earlier this year. In fact I've made several sex tapes, but I certainly didn't sign off on this and Vivid has no right to put it out. I am trying to get a hold of my attorney now." But Vivid says it's fine, that they were contacted by a third party selling the tape, and that they believe they are the right to market it. In the video, Sand is clearly seen having sex, lying on a bed, dripping melted ice cream on herself, doing her makeup, and playing with sex toys.

It's a big week for the Lamas family. "Leave It To Lamas," an E! reality show featuring Lorenzo's second ex wife and her children, including daughter Shayne who won "The Bachelor," debuted Sunday night. BTW- Shayne and her tv fiance have long since broken up.
at 3:49 PM

Could that creature be any more disgusting?!