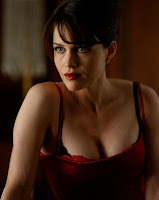 In the fourth season, Hank has to deal with the fall-out from his one-night-stand with then-underage pseudo step-daughter Mia (Madeline Zima) going public. His epic legal troubles force him to enlist the aid of hot, high-powered lawyer Abby (Carla Gugino) to keep him out of the big house but can he keep his hands off her?
For now, the premiere date of Californication has yet to be confirmed.
at 9:35 PM