Morgan Fairchild on "The Bold and the Beautiful" 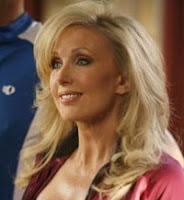 New role for Morgan Fairchild on "The Bold and the Beautiful": She will appear in a couple of episodes on August 10 – 14 as Dottie, a friend of Stephanie’s who will help bring about a fashion show walk-off between Forrester Creations and Jackie M.

Fairchild is no stranger to soaps. Besides "Falcon Crest", she has appeared on "Search For Tomorrow", "Paper Dolls", "General Hospital" and "Fashion House."

Joining Morgan Fairchild during the fashion show showdown will be previous guest stars, Alan Thicke as Rich Ginger and Jim J Bullock as Sergei, as well as Melissa Rivers who will be the fashion show’s celebrity judges. Samantha Potter, a runner up from “America’s Next Top Model”, will play one of the Jackie M models.
at 11:10 PM