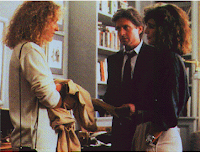 Director (Adrian Lyne—Indecent Proposal, Flashdance). Michael Douglas plays Dan Gallagher, a New York attorney who has a tryst with seductive Alex Forrest (Glenn Close) while his wife (Anne Archer) is away. Dan later shrugs off the affair as a mistake and considers it over. But Alex won’t be ignored. Not now, not tomorrow, not ever…even if it means destroying Dan’s family to keep him.

If you'll intend to buy this movie please do it by clicking here so you'll help keeping this site alive. Thanks ;-)