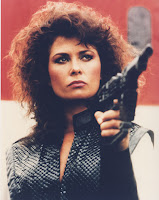 Last spring, the remake of "V" finished its somewhat uneven first season with a visual allusion to the red dust of the original series.

And while announcements like the coming three-sided war between the Visitors and two different factions of the human resistance have been encouraging; the most recent news should prove even more intriguing.

Jane Badler, who portrayed the Vistor leader Diana in the original "V" miniseries and TV series has signed on to join the cast of the new "V," according to Deadline. Badler will play the mother of Anna (Morena Baccarin), whose name is also Diana. 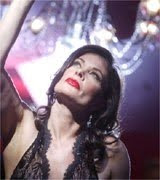 Badler will make her debut in the second season premiere. The move is being compared by Hollywood observers to Richard Hatch's stint on the "Battlestar Galactica" remake after starring as Apollo in the original series.

Following her original run on "V," Badler went on to appear in "The Highwayman," "Jake and the Fatman," "Falcon Crest" and the '80s remake of "Mission: Impossible" before moving to Australia and continuing her acting and singing career there.

Badler is the first star of the original "V" to return to the new series.
at 1:15 AM