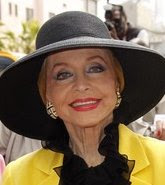 Several celebrities attended the Johnny Grant Post Office Dedication Ceremony at the Hollywood Post Office in Hollywood, CA on May 10, 2010. One of them was Anne Jeffreys (Amanda Croft from Falcon Crest's second season).

The post office has been changed to the Hollywood Post Office Johnny Grant Station after the longtime mayor of Hollywood who died in 2008.

Grant, a Goldsboro, N.C. native, made his show business debut on the radio in 1939 as a local newscaster there. Grant joined the Army Air Corps during World War II, hosting a daily radio show in New York City for servicemen and women.

He moved to Hollywood as a publicist, and appeared in several films. In Hollywood, Grant was a popular DJ at KMPC radio, and moved to a vice presidency at KTLA.
There, he produced TV shows on Channel 5, and such spectacles as the Hollywood Christmas Parade.

His image is still routinely seen on television clips, in file tape as he accompanied hundreds of stars unveiling their terrazzo stars on the Walk of Fame.

Grant was named honorary mayor of Hollywood in 1980 by the Hollywood Chamber of Commerce and the position for the rest of his life.
He died Jan. 9, 2008, in Hollywood at the Roosevelt Hotel, where he was the only full-time guest at the hotel. He was 84.