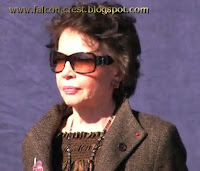 Academy Award-nominated actress Leslie Caron received the 2,394th star on the Hollywood Walk of Fame on December 8, honoring her work in such MGM musicals as "An American in Paris," "Lili" and "Gigi," and the drama "The L-Shaped Room."

Jack Larsen, best known for his portrayal of Jimmy Olson in the 1951-57 syndicated television series "The Adventures of Superman," and Neal Baer, the executive producer of "Law & Order: Special Victims Unit," were among those joining Caron at the late-morning ceremony on Hollywood Boulevard.

Caron's star is between those of Gene Kelly, who discovered her, and Louis Jourdan, who starred with her in "Gigi."

"I am thrilled to be here on Hollywood Boulevard and next to my friends Gene Kelly and Louis Jordan," Caron said. "It is wonderful to make such a fuss in Hollywood."

Kelly's widow, Patricia, was also on hand for the ceremony.

"I appreciate this award more as I am older, because when you are young, you tend to take things for granted," the 78-year-old Caron said.

Baer is the sponsor of Caron's star. Caron won an Emmy in 2007 as outstanding guest actress in a drama series for her portrayal of an elderly closeted rape victim in a "Law & Order: Special Victims Unit" episode written especially for her. "She's such a talented, dynamic performer," Baer, who described himself as a longtime "huge fan of her work," said before the ceremony. "Not only can she dance and sing but she has extraordinary range as an actor. She has done musicals that are charming and frothy and she's done intense dramas like `The L-Shaped Room.'

"She epitomizes what's really wonderful about Hollywood -- the depth of a performance, empathy and a true good spirit."

Born July 1, 1931, in what is now Hauts-de-Seine, France, Caron began taking dance lessons when she was 11.

In 1948, Kelly saw her in the Ballet des Champs-Elysees production of "La Recontre," a performance he remembered two years later when he returned to Paris in search of a dancing unknown to introduce in an "American in Paris."

Caron received best actress Oscar nominations for her portrayal of a childlike urchin who falls for a cruel carnival puppeteer (Mel Ferrer) in the 1953 musical "Lili" and the 1962 British drama "The L-Shaped Room," 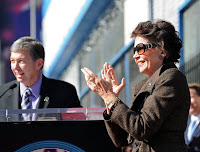 playing a young pregnant and unmarried French woman who moves into a London boarding house and befriends a young man (Tom Bell).

Caron received her star eight days after this month's publication of her autobiography, "Thank Heaven," whose title alludes to the Lerner and Lowe song performed in "Gigi" by Maurice Chevalier.

She donated an autographed copy to the Hollywood Chamber of Commerce, where the Johnny Grant Research Library is housed.

Caron is preparing to appear as Mrs. Armfeldt in a French production of Steven Sondheim's stage musical "A Little Night Music," which also stars Kristin-Scott Thomas as Desiree and Lambert Wilson as Frederick.