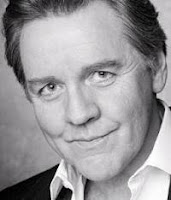 Robert Ginty, Nov. 14, 1948 – Sept. 21, 2009, action film actor, director and producer, passed away at his home in Los Angeles from cancer according to his son’s manager, Michael Einfeld. He was only 60.
Ginty played the role of Walker Daniels on Falcon Crest's season 9.

He was mostly known for his tough guy roles in B-movies, but in addition to writing and directing TV shows and films, he directed experimental theater productions and dabbled in painting and photography.

He is survived by his wife Michelle and son James Francis, an actor.